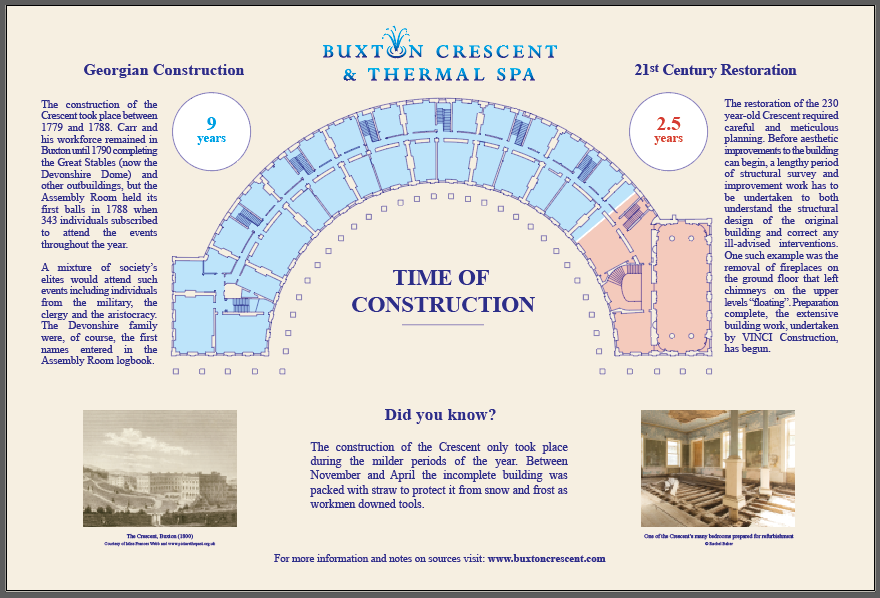 The interpretation boards on the Crescent hoardings were the product of concerted research at the Chatsworth Archive, the Derbyshire Records office, other county archives and numerous publications that delve into the well-researched history of the Buxton and the Crescent. The following notes aim to enrich and clarify some of the information on the information boards. Click on each image of the boards to enlarge

The total cost of the work enacted by John Carr of York for the Duke of Devonshire is actually higher than the total cited on the hoardings. This is because it includes on such buildings as the Crescent Stables (now the Devonshire Dome) that are not part of the restoration. This total can be found in Chatsworth Archives where John Carr’s bills for the work are held. In the bills, dated 1790, the total charged for all the work, and including Carr’s fee, was  £63,212, 1s, 8d.

The expenses of the Crescent’s construction are listed in the bills submitted to the 5th Duke of Devonshire by John Carr in 1790. They are now held at Chatsworth Archive. Though far from comprehensive or entirely complete, these bills and their accompanying logbooks offer a detailed incite in to the working practices and costs of the ten-year enterprise. The comparative cost of constructing the Crescent and outbuilding was calculated using the website https://www.measuringworth.com/ppoweruk/ This website demonstrates the different methods that the comparison

can be made and the different values that can result. For the comparison of the construction cost the price of labour costs was compared which was determined against the historical retail price index.
Numerous accounts describe the difficult ride to Buxton and the bleak nature of the countryside in the late 18thcentury. One such account written by Elizabeth Hervey in 1793 who recalls the road to Buxton from Chatsworth: “From this place to Buxton you pass through the most horrid country I ever saw – Immense cragged rocks, black heaths, very long steep hills, no prospect whatever but walls built of loose stone, some pasturage, no arable land and not a single tree…”  (1793 Journal of Elizabeth Hervey (formerly March)  – Recalling a visit to the Crescent and Buxton Baths. Stafford Archives – D6584/C/57)

The construction of the Crescent was part of a series of buildings and constructions including numerous outhouses, offices and most notable (aside from the Crescent) the Great Stables. However, for comparison only the time spent on the Crescent itself was counted, determined again by the use of the bills submitted in 1790. This was calculated as 1779 when plans began to be drawn up to 1788 when the final internal work was completed. The Crescent was open prior to this final date, but it is clear work continued despite public entering the building. Logbooks, retained at Chatsworth archive, demonstrated the wide variety of roles undertaken by individuals building the Crescent. They served to demonstrate that individuals downed tools for the winter months and were then employed to protect and secure the building over the colder period. Other information the logbooks demonstrated included various volumes of materials as well as the names of individual labourers and their pay rates.

The precise numbers of guests the Crescent held along with the exact layout of the building remains disputed. The amount recited in the comparison (200 plus servants) is taken from the research of Brian Wragg, later published as The Life and Works of John Carr of York (2000). No exact number can realistically be settled on and similar contention surrounds the nature and uses of the lodging houses in the centre of the building. These rooms were gradually subsumed by the hotels, but were certainly built with the intention of housing the most important guests, though accounts vary about their use (or not) by the Devonshire family.

The numbers and names of individuals who made up the workforce were taken from the archival documents held at Chatsworth. 1784 held the most complete accounts for the years, as it was the only year that included the Mason’s logbook. It was in this particular document that the quarrymen, specifically enlisted by Carr, were noted. As the construction developed and bespoke and specialist work inside the Crescent began specialist joiners and carpenters were contracted from such Cities as Sheffield and York, tasked with specific creations such as the dramatic curved staircase that led to the Assembly Room. VINCI will employ approximately 2000 individuals per year during the course of the restoration, though only around 200 are on site at any one time.

For further details on this project or if you are interested in getting involved or volunteering on future research projects, please email lmackenzie@buxtoncrescent.com

Your ticket for the: GEORGIAN CONSTRUCTION / 21ST CENTURY RESTORATION